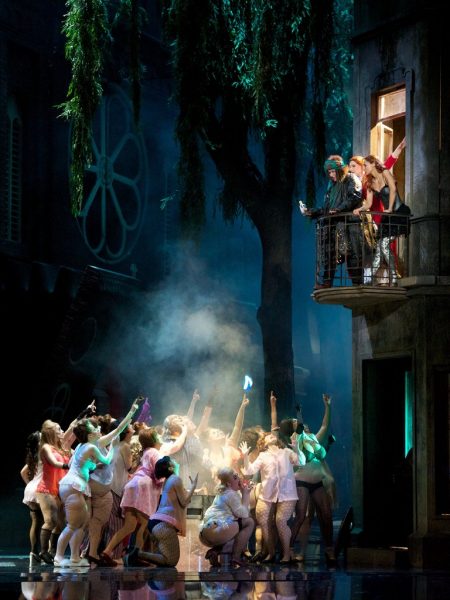 BRUSSELS — The first act of Stefan Herheim’s production of Dvorak’s “Rusalka” takes place not in the libretto’s idyllic forest clearing but in an anonymous European city. Lights flicker behind the curtains of the apartments overlooking a quiet square, as people watch television.

The water nymph Rusalka sings her lyrical showpiece, the “Song to the Moon,” while lying atop a kiosk. Affixed to it is the poster being used to advertise Mr. Herheim’s production, which had its premiere here at the Théâtre Royal de la Monnaie in December 2008 and is now being revived. A man spies on her from a window, sometimes averting his gaze but always returning.

Watching this “Rusalka” is a similarly unsettling endeavor. Over and over the sensuous pull of the music is placed in tension with reminders to think, to remember that it’s all just a show. This “Rusalka” does not let us simply go to the opera. It keeps asking why we are there, what we want to experience and what we hope to gain.

It is for exploiting this tension between opera’s emotional and intellectual levels that Mr. Herheim — whose work has not yet been seen in America — has become known. His breakthrough came in the summer of 2008, with a widely acclaimed production of Wagner’s “Parsifal” at the Bayreuth Festival, in which he reconceived the quest for the Grail as a metaphor for modern Germany and for the festival itself.

At the lean, tight performance of “Rusalka” on Thursday, conducted by Adam Fischer, Mr. Herheim had similarly found the meaning of an opera not in the plain indications of the libretto but in an alternative reading that emphasizes the audience’s experience.

He focuses not on the pathetic Rusalka, here a streetwalker with a heart of — not gold, exactly, more like sequins — but rather on the Water Gnome, commandingly sung and acted by the bass Willard White. In the libretto the gnome is Rusalka’s mournful father, but here he is an ambiguous, ambivalent character — he may be the prince, grown up a few decades — who half experiences and half imagines the plot, which in this version curves toward confusion but never quite reaches incomprehensibility. (Heike Scheele’s ingenious set keeps shifting between solidity and transparency.)

So “Rusalka” becomes less about a woman’s suffering and more about a man who fantasizes about watching a woman suffer: someone not far from an opera fan. The darkest consequence of the production’s relentless questioning of why we go see works like this is to remind us that we, too, want to see women perform to their limits — like the Rusalka of the final act, the penetrating soprano Myrto Papatanasiu singing powerful high notes in a slinky, sparkly silver torch-song gown — and then die.

Though Mr. Herheim’s work is rigorous, it is also fun, and this “Rusalka” is serious but the opposite of dour. It’s a circus: brightly colored and full of dancing and neon lights. The ball scene becomes a full-theater party, with confetti cannons fired from the upper balconies. The production is as scrupulous in its deconstruction of the text as a Wooster Group show, but with the joyous excess of Franco Zeffirelli’s Metropolitan Opera production of “Turandot.”

During an intermission the woman to my right, an actress and director, was less than happy. She had attended many operas as a child and had found them, she said, “enchanting.” But this “Rusalka” confused and angered her. It is indeed confusing and demanding; that is its intention. But it is also bewitching. Mr. Herheim’s production takes an opera usually valued for its lush escapism and returns to it the surreal darkness, the true enchantment, of a fairy tale.